Jacob & Co is an American Brand from New York, it focuses on top-notch jewelry and it was created in 1986. The founder is Jacob Arabo, who I had the pleasure to meet at the Jacob & Co ‘Magnificent Timepiece & Jewel Exhibition’ this summer, an event that gave the entire French Riviera something to talk about.

Jacob & Co ‘Magnificent Timepiece & Jewel Exhibition’. This has been the forth edition that celebrated the creativity and extravagance of his jewelry pieces and watches.

Jacob & Co ‘Magnificent Timepiece & Jewel Exhibition’ took place at the Hotel Hermitage of Monaco. The 4th of August 2016 there was the gala evening in which I participated, and the exhibit of Jacob & Co remained until the 22nd of August, in the most important room of the hotel.

Below you can see the photos of the evening of a thousand nights. 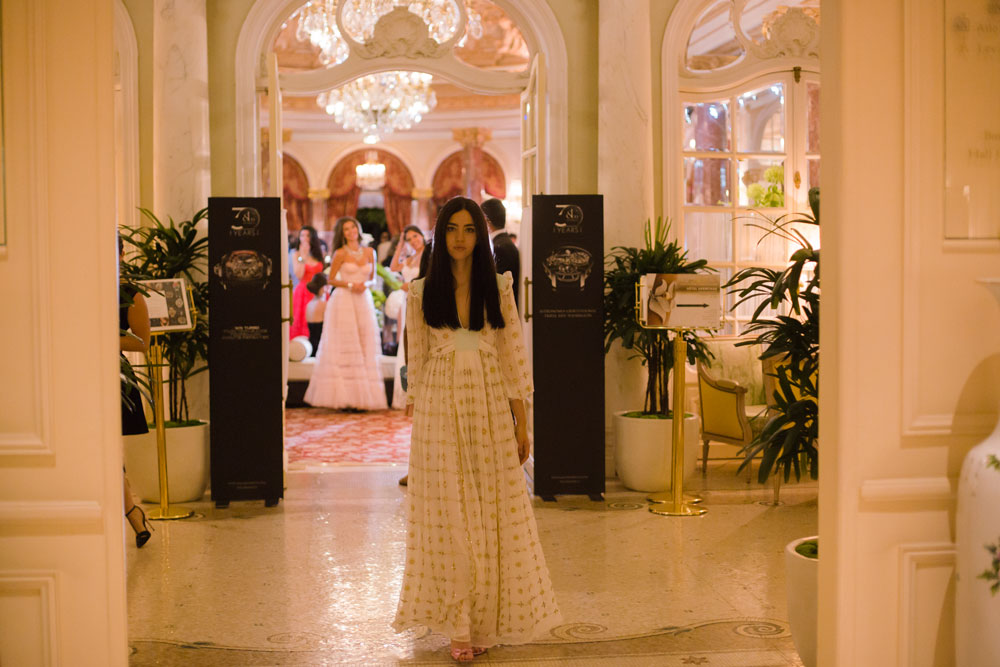 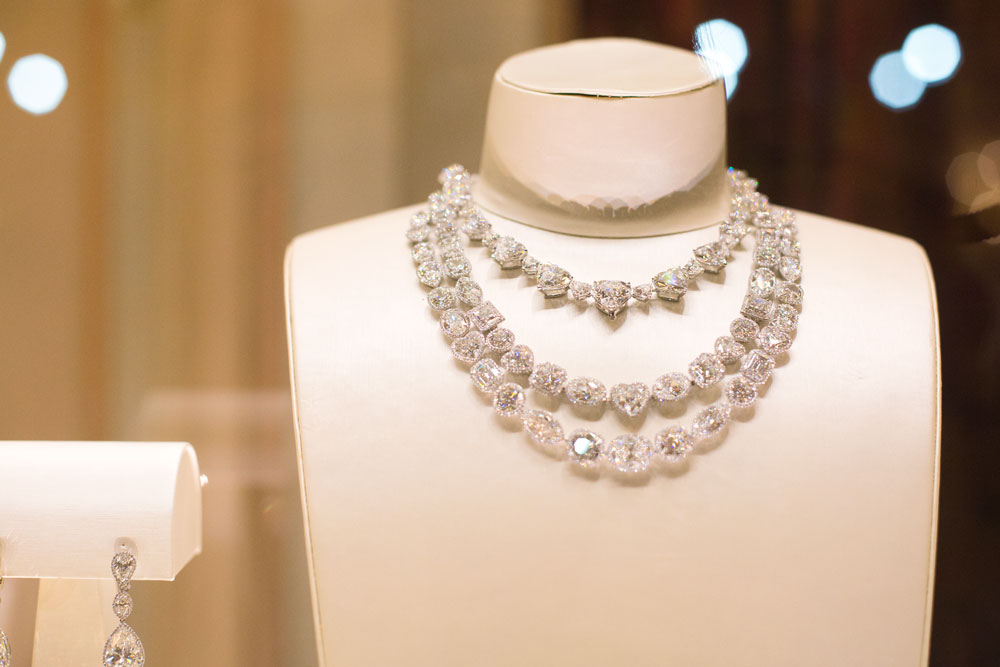 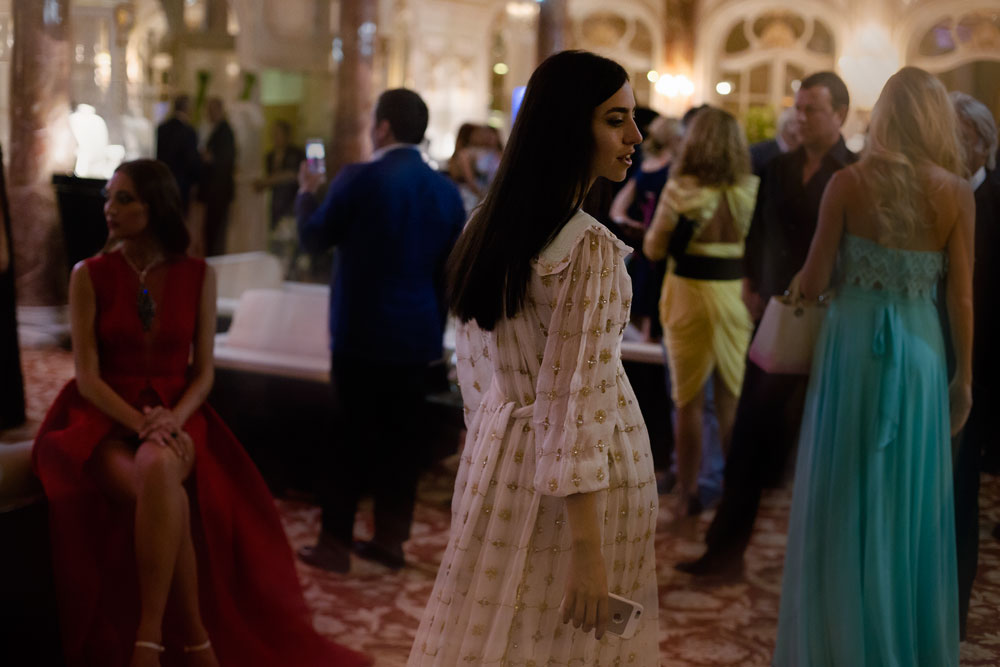 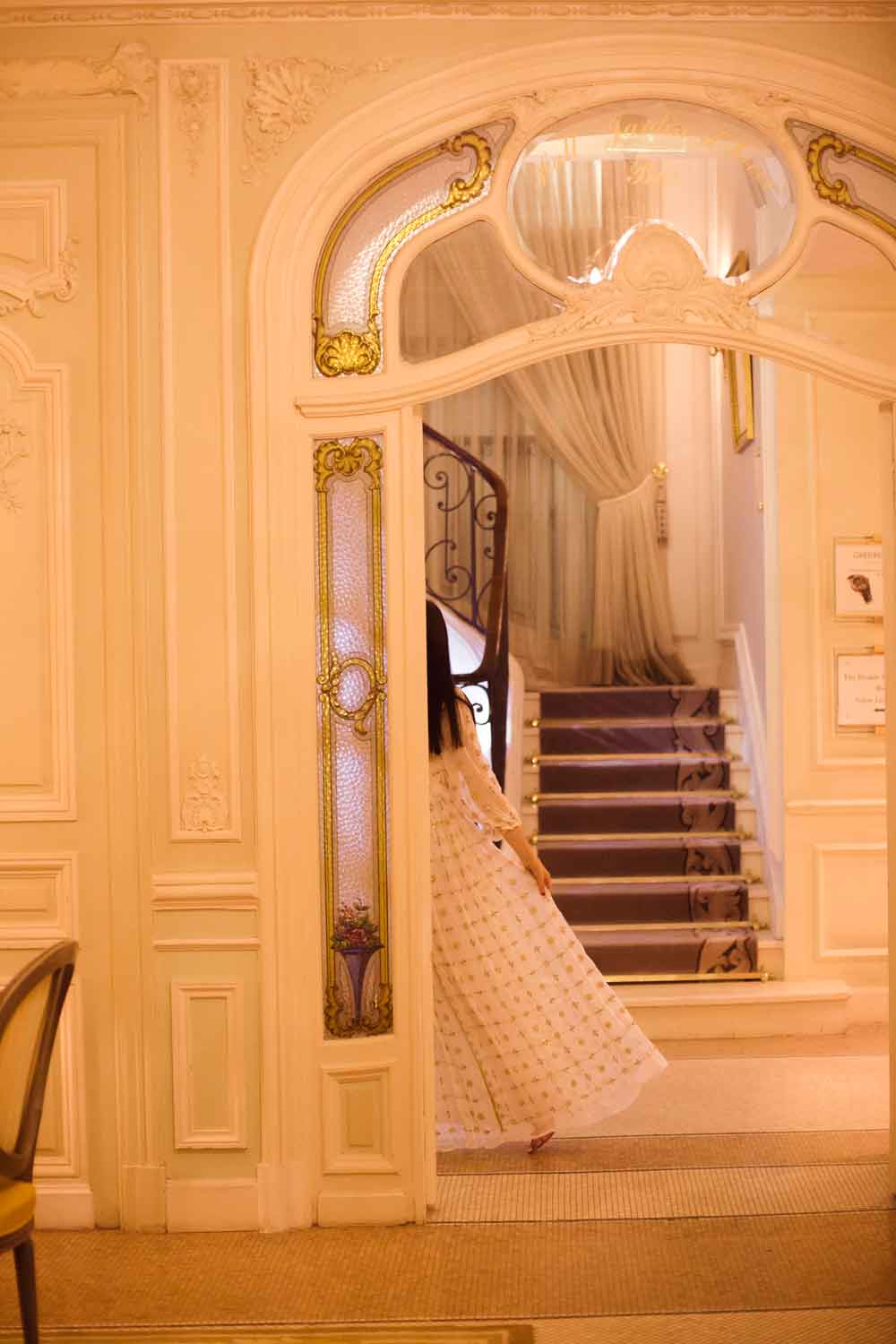 I had just arrived in Monte Carlo. It was the first evening of my vacation…I must say what an evening!

Getting to know Jacob Arabo was really exciting, he is an extremely fascinating man and very charismatic.

The Jacob & Co jewelry and Jacob & Co watches are worn by princesses, princes, Sheiks and famous personalities such as Madonna, Rihanna, Sara Sampaio, Pharel Williams and many others.

I am wearing an embroidered evening dress by Manoush and Gucci shoes.

I have made other posts dedicated to my holidays, in Monte Carlo: The dinner at Cipriani, The private beach, Twiga and more. To see all post you can go to travels section and click on Monte Carlo.

Now having talked about my great experience at the Jacob & Co ‘Magnificent Timepiece & Jewel Exhibition’. I would like to talk about the Jacob & Co watches and Jacob & Co jewelry brands and its founder. Tell you a bit about his story and what his watches and jewelry pieces are really about. You will read where he is from, how the brand started, who he has influenced with his design and what has inspired him as a designer. Who has worn his pieces, what other accessories he has developed besides watches and jewelry and everything there is to know about this marvellous person.

Jacob Aarabo and his successful career

Jacob Arabo, born in Uzbekistan is a Bukharian-Amerian jeweler who started as an apprentice when he was only 16 years old. Soon he was able to open a small booth in New York at the Kaplan Jewelry Exchange. (Which at that moment was the heart of New York City’s jewelry district). First he started his company called Diamond Quasar, while he began his own brand Jacob & Co (the one we all know and love today). He also began designing for many private jewelry brands and clients; and like this he started his career in the luxurious world of jewelry and watches.

Later on the jewelry pieces made by him caught the attention of the R&B celebrity Faith Evans and her husband Notorious BIG, who helped grow the reputation of the brand in the music business, he was known among the celebrities as ‘Jacob the Jeweler’.

This is the reason why the music industry had a great impact on this brand and because of this Jacob & Co is well recognized for donating watches and diverse jewelry pieces to hip-hop artists, basketball players and celebrities in general. An example of this is Jay-Z that in his video ‘Girl’s Best Friend’ (a love song to a rapper’s diamonds) is wearing a Jacob & Co jewelry piece. Other singers such as Nas and Beyonce also have mentioned the Jacob & Co brand in their lyrics.

Due to the fast growth of the brand in 2002 they started doing Jacob & co watches. He has always had an avant-garde vision for his watches, he gets inspired by the beauty around him, and he believes in creative evolution. ‘Nature, in particular, has always played an influential role in my creative processes, from my early designs, to my newest Jacob & Co collections, I have always been inspired by our natural world’ says Jacob Arabo.

Nevertheless, he always keeps the tradition of the company’s Swiss watchmakers and honors their practices, without losing the design finesse. Because of this he has been able to achieve great design and extremely high quality. He is also recognized today as ‘Master of World Time’.

Only two years later after releasing his watch line, in 2004, Jacob & Co opened its first store in New York on the 57th Street. And after this, in 2006, he invented the Quenttin Tourbillon which is one of the most technical timepieces that exist, having a vertical tourbillon and a 31-day power reserve.

Also this same year Jacob & Co ‘s ‘The World is Yours’ watch won the Travel + Leisure Design Award and his timepieces have been listed in many articles as part of the most luxurious, inventive and innovative watches of the world.

Another remarkable creation was his Jacob & Co Astronomia Tourbillon (that was presented at the BaselWorld Watch and Jewelry Show); I must say that we can’t call this just a watch. It is a masterpiece where you can see the physical 24-hour rotation of the earth along with the stars that are observable at night in the Northern Hemisphere. It’s the most magnificent piece of design you could ever dream about. Imagine having this Jacob & Co timepiece on your wrist I don’t think anyone could not remain perplexed by its beauty or just the idea of having the universe on your wrist, it just sounds surreal.

In addition, he has also created a watch in partnership with Flavio Briatore (a well known Italian business man), which also debuted at BaselWorld Watch and Jewelery Show (which is a trade show of the watch and jewelry industry) but a year earlier in 2015. It is one of the most expensive watches ever created, with 260 karats of diamonds, the Billionaire Watch is worth 18million. This watch is most commonly known as Jacob & Co Diamond Watch

When it comes to pushing boundaries of the creation of watches, very few brands posses the knowledge, skills and resources to pursue these wild kind of ideas. Jacob Arabo alongside his carefully assembled team of watchmakers sink all of their energy into the development of the complex projects that are extremely hard to develop, but the results of all the hours dedicated to the projects are noteworthy.

Not only is he famous because of his watches but also for the Jacob & Co Jewelry collections. In this section of the brand he offers unique and noteworthy designs with a great diversification of colors (such as pink, yellow), cuts and styles, they say that his design style is heavily influenced by Art Deco, because of the bold geometric motifs he uses repeatedly.

From engagement rings to wedding bands for ladies and gentleman.

They also offer custom wedding rings, where the customer can choose diamonds of any color, size and shape; these wedding rings are worldwide known for their unusual diamond cuts and modern designs. It is said that Jacob & Co jewelry uses the most exclusive and exceptional jewels. One example of this is the Golconda diamonds of India which are pure and uncolored, they are often described as pools of water. Not only this but these stones are amongst the world’s most coveted gems. Also he affirms the use of stones from Africa and Brazil. I must underline that the Jacob & Co as a company only buys diamonds from countries that take part of the KPCS (Kimberley Process Certification Scheme) which ensures that the diamond purchase isn’t financing violence, etc…

Not only do they offer wedding jewels but also high jewelry, fine jewelry and men’s jewelry.In the high jewelry section, you can find the most singular, rare and exceptional pieces. Fine jewelry is where you ind a bit more traditional or classical designs but still using the most precious materials to be found in the world. And in the men’s jewelry you find pins, broaches, bracelets, cufflinks and many more. It is to be remembered that Jacob and Co jewelry will always be made out of the most extravagant materials.

Each one of his designs can be called extraordinarily rare and exceptional, it can be said with certainty that his jewelry pieces are a form of wearable art. Originality and inspiration go hand in hand with the finest jewelry making techniques in this way creating iconic and complexly crafted masterpieces. His designs are made with great care and love, always aiming to be transcendent in time and not only remain trendy but to create a style. It can be observed that the pieces created by Jacob & Co, are without any doubt the result of dedication, an exceptional artistic eye and much knowledge.

Later on in 2012 he participates in his first exhibition in Monaco, this year as I told you, I had the pleasure to meet him and participate this event. The name of the exhibit this year was: Jacob & Co ‘Magnificent Timepiece & Jewel Exhibition’.

You can buy Jacob & Co designs in 20 countries. Also he has opened various stores around the world, three in the United States where he has a

mine-inspired flagship store, located in Park Ave townhouse in Manhattan; Las Vegas at the Wynn Las Vegas hotel. In London he also has three boutiques. He has storefronts in the Monte Carlo hotel Stardust. Other shops are located in: Geneva, Qatar, the United Arab Emirates, etc.

Being so international I can understand why he created his Jacob & Co ‘Five Time Zone Watch’ that basically shows four predetermined time zones (New York, LA, Tokyo and Paris) and the fifth time zone is determined by the location of the wearer. He even made a watch that can display up to 20 time zones, this watch is the Jacob & Co ‘Ghost Watch’. 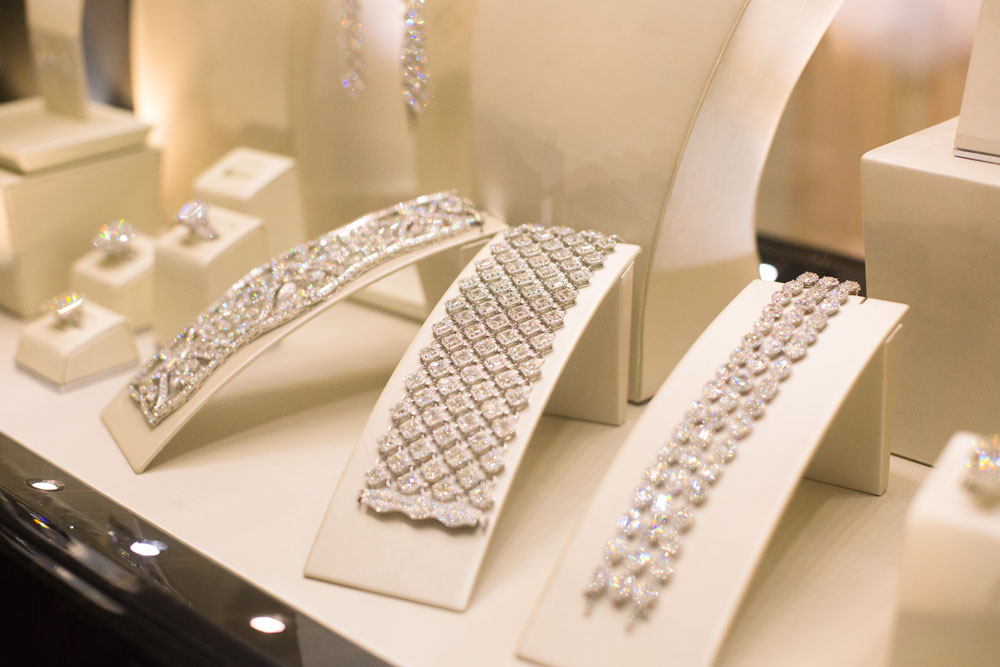 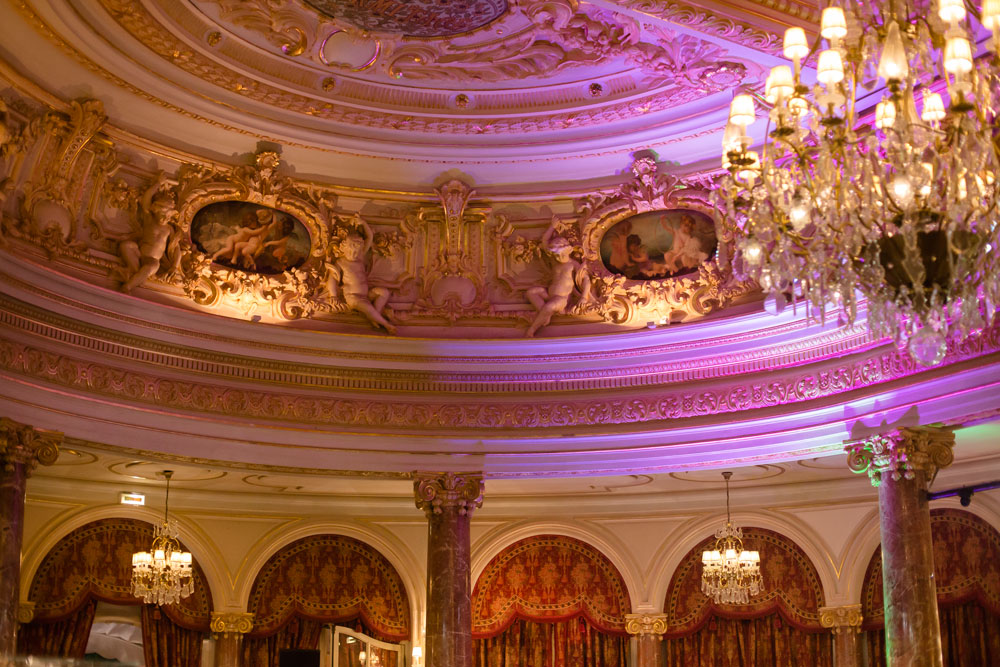 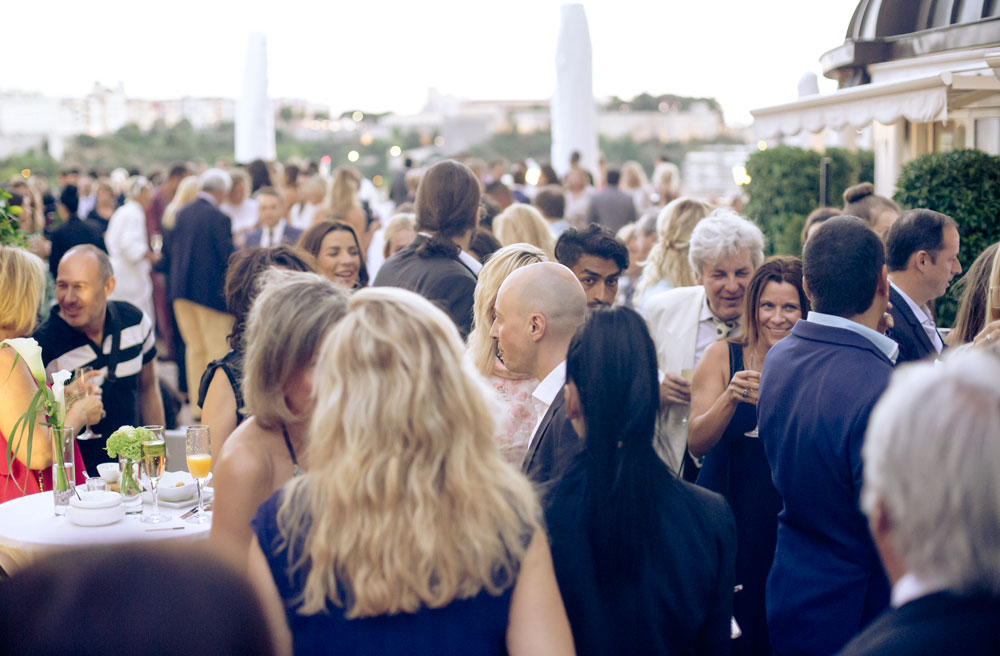 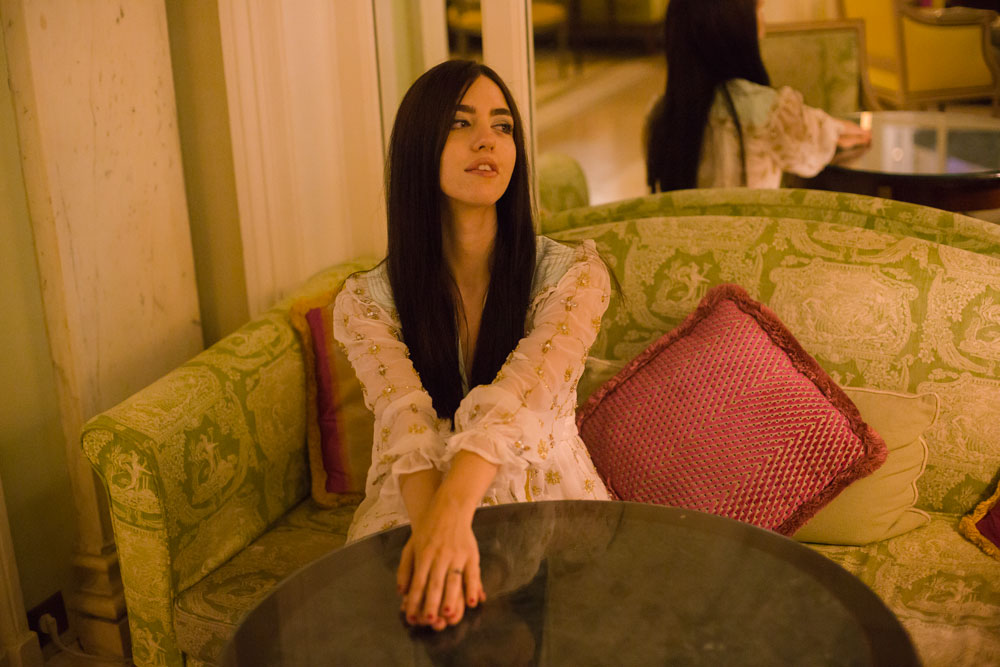 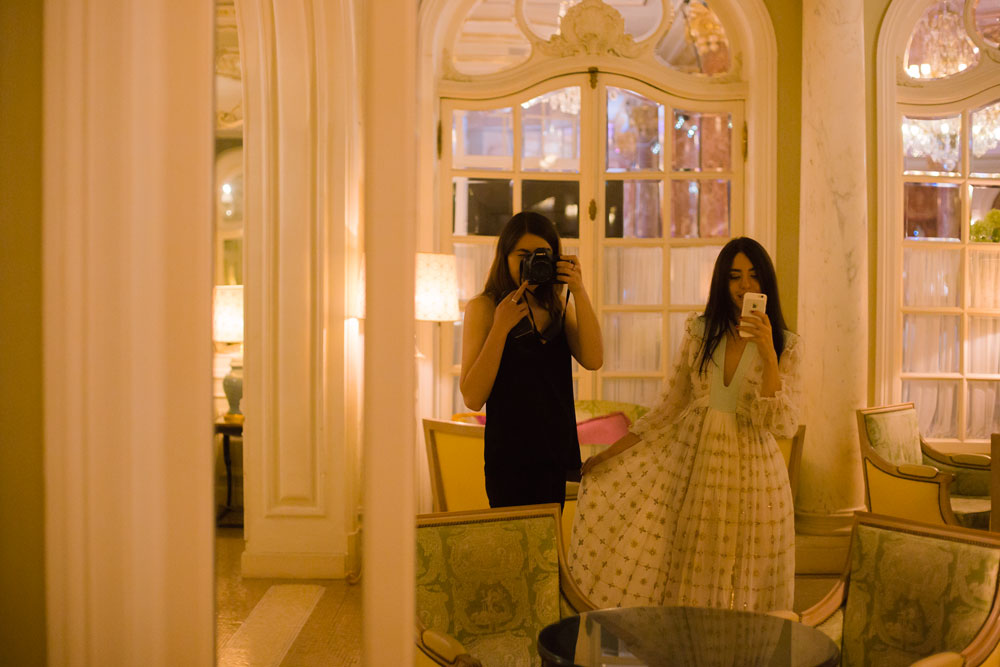 Yana and I at Hermitage hotel in Monaco 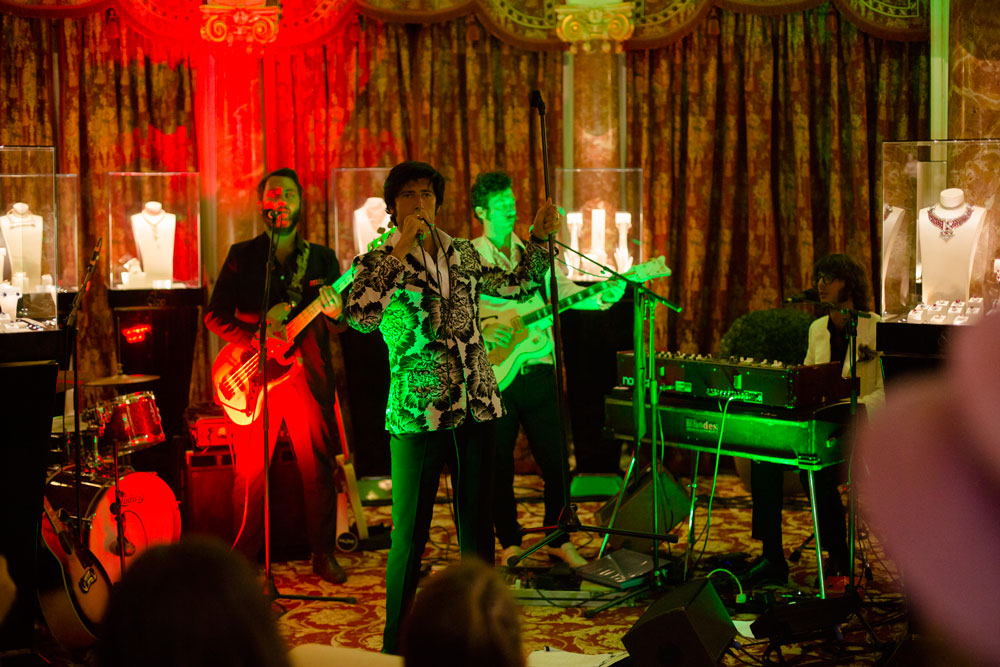 Here is the address of his Jacon & Co flagship boutique, if you ever go to New York you can go check it out.

Another thing Jacob & Co has developed as a brand throughout the years is the design of accessories. Fine and luxurious accessories such as beautifully embroidered clutches, like his ‘Peacock Design Clutch Purse’ that has a unique and astonishing embroidered peacock made out of multi-color sapphires, brown diamonds, white diamonds and jade stones. He also created a collection of diamond dice that can be found in various colors such as white gold with blue and white diamonds. Diamond pen is another item created by the jeweler of Jacob & Co ,  this pen is made out of white gold with a special cut emeralds and diamonds and in case this above mentioned isn’t luxurious enough he also made a Baby Spoon made out of white and rose gold.

Jacob Arabo’s latest project is going to be auto-focuses, what is meant by this is that he will be designing his own brand of sports cars to be released in a few years in limited edition. ‘They are making jewelry – why can’t I make cars?’ he told the business insider. Which is actually true all the sport car brands are expanding their businesses into the luxury accessory section, so why can others expand their business too?

Known worldwide for his business. He has made a huge career out of his passion, he has been called innovative, crazy, elegant, avant-garde, creative, luxurious, and many more things. All the above mentioned describe him, but all this is definitely stated, by what you can appreciate, when you observe all the pieces he has created throughout his career. Each and every one of them you can see the care and the dedication put into the development of the creation of it.